Pittsburgh, PA! It's almost time for: 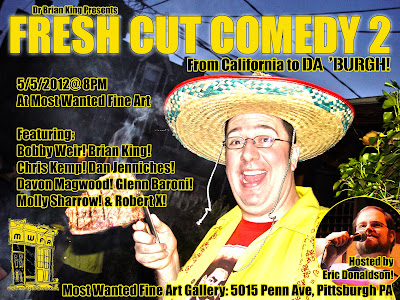 Produced by Dr Brian King (www.drbrianking.com) Originally from New York, Brian has spent his formative years living all over the US, giving him a unique perspective of the world. This included a 4-year stint in Pittsburgh, where he wrote a humorous advice column under the pseudonym “Dr G”. Now based in San Francisco, he continues to tour all over the nation as both a comedian and public speaker. A trained psychologist, he has a comedic style that’s half professor, half idiot, and all smart-ass. He was the founder and producer of the highly-reviewed Wharf Room Comedy show in San Francisco, and has worked with such talents as Will Durst, Rick Shapiro, Mo Mandel, Laurie Kilmartin, & Steven Pearl. He produces the annual Bay Area comedy competition "Walk the Plank" and can be seen on comedy stages and conference centers all over the country. He is also a frequent guest on comedy talk radio.

Hosted by Eric S. Donaldson (www.ericdonaldson.com) has been performing comedy in the Pittsburgh area since 2003, starting out in the Mr. Goodbird USA sketch troupe. In 2005 he began performing as the lead singer and writer of his comedy band, Eric and the Electric MP3 Player, which still performs around town. He started performing stand-up in 2008, and has performed at The Improv and headlined at the Brillobox. He currently runs an open mic at Belvedere's on Tuesday nights, and tweets hilariously under the mysterious handle of @EricJokes.

Chris Kemp, Pittsburgh's "Golden Girl", has been doing comedy for four years. She just looks like she's beenn doing it forever. Where does she perform - anywhere they let her, including: western Pennsylvania, West Virginia, Ohio and a recent northern Florida tour. She stayed far away froom the Fountain of Youth - didn't want to jeopardize her act.

Dan Jenniches started doing stand-up comedy in 2008. Since then he has performed in many venues, such as the Pittsburgh Improv, Corner Café, too many bars to count, and one bowling alley. In October 2010 he emceed a weekend at the Pittsburgh Improv, opening up for Sebastian Maniscalco. In February 2012 Dan did an opening set for Pittsburgh radio legend Jim Krenn. Dan has also been a featured guest on the podcast “Haters for Hire.”

Davon Magwood (www.davonmagwood.com) is known for his alternative approach to traditional comedy. He made his debut to the stand-up world in February 2007 at the Pittsburgh Funnybone. Working toward world domination, . he has produced many shows over the past few years, headlined the Pittsburgh Improv, was a finalist in the “Best of the Burgh” competition two years in a row, and won the Kansas City comedy competition in 2009. He hosts the Open-Mic-Night at The Shadow Lounge, Howlers Open-Mic-Night, and his own show, Waffle Time, in Pittsburgh.

Glenn Baroni, with his impeccable grammatical syntax will keep your attention from the time he walks on stage until the time he walks off. Leaving no subject untouched his unique no restraint humor will either have you laughing or offended, either way you will be entertained!