Traveling through the Australian Outback reminds me of an excerpt from my brother's book Seven Months Deep (still available, by the way)

"My brother Brian and I once rented a car in San Diego for a trip down the beautiful peninsula of Baja California, Mexico. Although well traveled in the rest of the country, at the time neither of us knew anything about the peninsula, which contributed to our excitement. As we drove southbound on the highway through the dessert, we realized one thing: there were hardly any gas stations. We passed one station when our tank was over a quarter full, but then continued to drive a hundred miles without passing another. Soon we were approaching an empty tank and, according our rudimentary map, it appeared that the next town, Catavina, was about forty miles away. Instead of turning around and trying to make it back a hundred miles, we decided continue trekking south and hoped that Catavina would have fuel. Due to the conditions of the road and its meandering path through the mountains (not clearly evident on our map), it took us about an hour and a half to travel those forty miles and we rolled in to Catavina on fumes. It turned out that the town wasn't a town at all, just a single hotel and a gas station. It also turned out that the gas station hadn't been a functioning gas station in many, many years. We were screwed.

"Siphon Man saved our lives, or at least our vacation. He was a local entrepreneur that we accurately dubbed "Siphon Man" who had decided to capitalize on the "unprepared Gringo tourist" market. He would drive his pickup to a nearby gas station and fill huge metal barrels of fuel to carry up and down the highway looking for situations like ours. Hours after helplessly waiting for a miracle in Catavina, he came down the road and used a homemade siphon hose to fill our tank, for a hefty fee. At over three times the market cost it was the most expensive gas in the world, and was probably mixed with a bit of water and sand to stretch his buck, but it was exactly what we needed. The best entrepreneurs find a need to satisfy."

Posted by Dr Brian King at 2:39 PM No comments:

Things you could do other than vote today:

1. Celebrate TACO TUESDAY!
2. Watch re-runs of Murder She Wrote.
3. Enjoy a sweet glass of egg nog.
4. Work your stupid job.
5. Think smug thoughts about how everyone else is just feeding into a broken system.
6. Exercise! yeah right, like you'd do that.
7. Finally start working on that novel you keep putting off.
8. Stalk all of your non-bocked exes on Facebook!
9. Pat yourself on the back for your excellent time management skills and all the great things you got accomplished.
10. Read The Laughing Cure!

Of course, if you vote you can still do those things. I'm just saying...
Posted by Dr Brian King at 7:00 AM No comments:

This Friday (11/4) marks the end of my 2016 speaking tour on The Habits of Stress Resilient People. My last seminar on this topic will be at the WORLD GOLF VILLAGE RENAISSANCE RESORT, 500 South Legacy Trail, 32092. To register please go to: www.ibpceu.com

After my last seminar, I will be hosting a night of comedy at the World Famous Jackie Knight's Comedy Club! As host, I get to unleash a number of local up and comers and seasoned pros at one of my favorite comedy venues in the continent! Please come check it out, information is on the flyer.

I will also be autographing copies of my book The Laughing Cure! 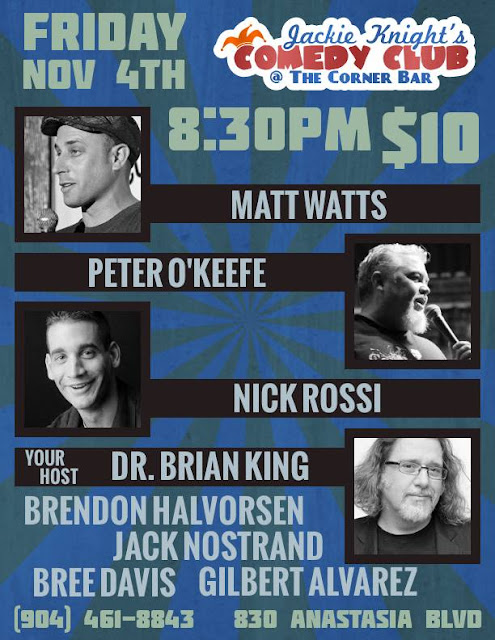 Posted by Dr Brian King at 8:47 PM No comments: