On the Road with Robert X! 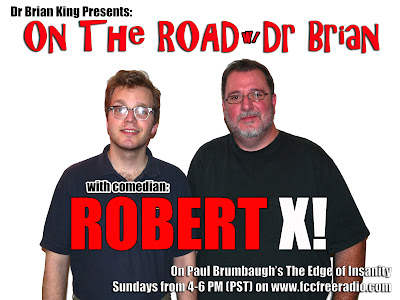 This Sunday on my weekly radio segment "On the Road with Dr Brian" on the Edge of Insanity radio, I'll be interviewing comedian Robert X, the blackest comedian in Pittsburgh, PA!

Robert recently performed in my Fresh Cut Comedy show in da 'Burgh and rocked the house with his subtle and quirky comedic style. Expect more of the same from Sunday's show!

June is for Videos

In my weekly youtube digest this week, I was sent 2 video links. Both were released this month by talented filmmakers that I know, both feature some great bay area talent, and both credit me as a contributor despite the fact that I did very little for each.

First, I'll introduce you to "Pool Pirates" by Erikka Innes. A great comedic short about a group of shipwrecked pirates taking refuge. I did background still photography and Erikka was sweet enough to give me a credit. Seriously, I did little more than show up for a day of shooting.

Next, there's "Welcome To The Stage: Episode 3". This is an ongoing documentary about female comedians in the SF bay area, and half of this episode was filmed at my former comedy club "Wharf Room Comedy"

And I'm actually in it!

On the Road with Cherish Armour

THIS SUNDAY on my weekly segment "On the Road" on the Edge of Insanity on FCC FREE Radio I'll be interviewing the AWESOME Cherish Armour! Cherish is a regular model for playboy and, well does it matter? I mean I already said playboy... She's also the face of FCC Free Radio and is a rocking cool chick that was nice enough to grant me an interview. Also on the show, as usual will be hosts Paul and Travis, and thankfully neither will be sporting a bikini. It all goes down at 4pm PST onwww.fccfreeradio.com, studio 1a!

Posted by Dr Brian King at 9:45 AM No comments:

As a comedian / psychologist touring the country I've found these two worlds colliding more and more, and I had a great conversation with Philippe Mathews about both. Listen in as we discuss the formation of habits, some of the neurological mechanisms underlying our behavior, and share a few laughs.

The podcast of the show can be found here:
http://thepmshow.tv/channel/personal-development/overcoming-the-habit-of-poverty-with-dr-brian-king/
Posted by Dr Brian King at 10:26 PM No comments: